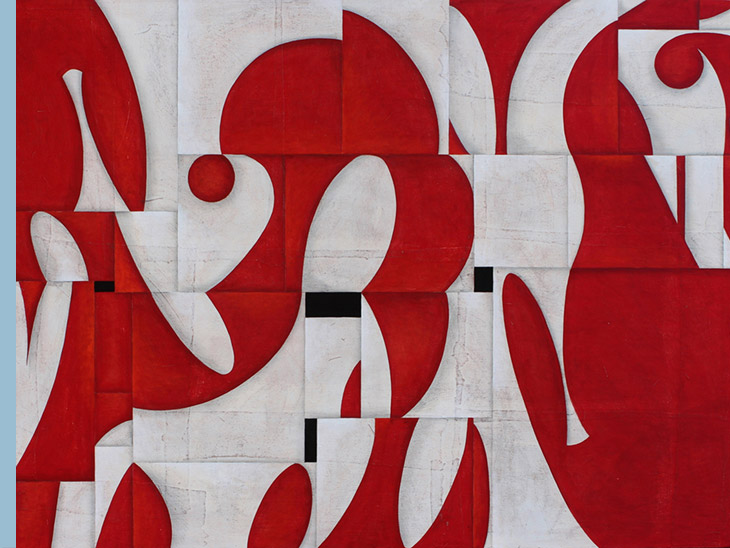 The Typographic Abstraction collages by Cecil Touchon (1956, Texas) are made by chopping of letters and using the elements to create new abstract forms as a kind of concrete poetry. It is through his work in collage that he has made a lasting mark on the world. He creates collages where he deconstructs found language, dismantling text from all kinds of sources including street posters, old books, emails, fabricated papers, etc. He cuts them up into sub-letter units and reassembles them into collages that are new forms of order. Stripped of literary meaning, these works rely on composition, rhythm and visual movement to convey their meaning which is ambiguous and intuitive.

Cecil Touchon is a renowned artist whose career spans thirty-five years. He has an international following amoung collectors and is a major figure in the Massurrealist movement as well as a co-founder in 1987 of the International Post-Dogmatist Group. His paintings and collages are abstractions based upon typography.

His paintings use trompe l’oeil techniques to painstakingly create the illusion of large collage abstractions. They are characterized by colored geometric shapes — overlapping rectangles and rounded wedges — that seem to revolve and recede into the background. The works are a play of lightness and mass that are both visually striking, and because of the hints of letters, intellectually satisfying.

Touchon has played a major role in the fine arts for over three decades and has participated in the Venice Biennial in both 2001 and 2009. His work is associated with Mail Art and the Fluxus communities and can be found in major corporate collections and museums, including the Museum of Modern Art in New York, the Chicago Art Institute and the Tate Modern in London.

Cecil Touchon’s paintings, which he considers deconstructed poetry, stem from his interest in the modernist history of abstract art and his belief that language and commercially designed objects are too often relegated to purely functional roles. Touchon takes fragments of language from sources like spam email, play bills, books and billboards, manipulating them into purely aesthetic arrangements. While previous works were deconstructed shapes derived from the Central Mexican landscape or architecture arranged into abstractions, Cecil has always been drawn inspiration from the ideas of modernist artists and poets who sought to reduce painting and collage to its essence and create a new visual language. “I think of these works as a sort of visual or concrete poetry albeit a nonobjective one whose interest is not in being tied to literary meaning but a meaning of a purely visual nature.”

"I am exploring the boundaries between art and poetry in these intimate papiers colles composed of bits of lettering and the empty spaces between them. Stripped of literary meaning, these works rely on composition, rhythm and visual movement to convey their meaning, which is ambiguous and intuitive. These works are constructed from distressed street posters and bill boards that have been carefully edited into inlayed bits of printed matter creating passages that move from figure to ground and then reverse back to figure through gentle curves, irregular grids and subtle shading techniques. Snippets of lettering almost become recognizable letters or perhaps proposals for a new poetic alphabet but always slip back into forms and spaces creating the possibility of enigmatic and open, simultaneously plausible interpretations."

Cecil Touchon’s paintings are called Post Dogmatist Paintings and start with the prefix PDP and then followed by a number which is the sequential number of the painting in this long standing series of works. The numbering system began in the 1980s and Touchon has maintained it throughout his career since that time.

The paintings are all in the typographic abstraction style using collages as studies or as Touchon says, as scores, in the Fluxus sense of the term. As a score, Touchon sees the studies as the original visual instructions according to which the paintings are composed as performances. As in music, a score is an instruction for how the work is to be performed by musicians. In Fluxus tradition a score, known as an ‘event score‘, is usually an open ended and often minimal instruction for fluxus performers who might have wildly different interpretations depending on who is performing the piece and what the prevailing circumstances are. Scores can be performed over and over again and each is a little different and hence a unique iteration or interpretation of the score.

Touchon, on occasion, will make new iterations of the same collage composition to explore the image in different scales, different color schemes or using different techniques and so, while the progression of the works in collage will proceed along its own trajectory, Touchon will look back over the entire series of collage works and pick any particular one that he wishes to perform as a painting. There is often no connection chronologically between the creation of the original collage work and when it might be performed as a painting. For instance, a collage might have been made in 2001 but not produced as a painting until 2017 or perhaps a painting was made at a small scale and then, years later, at a larger scale.

Paper is almost always used as a substrate for the paintings to allow Touchon to maintain the ‘feel’ of collage in the paintings. In recent years, Touchon has also been making collages on small to medium sized canvases or panels and they remain in the PDP series.