In his work, the Belgian painter Hervé Martijn (1961) presents a haunting image of the fragile, vulnerable human being, who, stripped of all cultural references, falls back on his naked existence. He makes whispering, noiseless paintings in which the human form is reduced to a shadowy appearance. His musing painting offer precious moments of deepening and reflection. At the same time, this artist creates a detached image of humanity that is permeated with a certain feeling of alienation. At no point do his ashy-colored paintings impose themselves on the viewer, but the ascetic and restrained climate always continues to prevail. Do we as viewers feel like a voyeur or an engaged spectator, who ends a storyline that the artist has set out for us?

While visiting friends during the winter, who are quite interested in contemporary art, they offered me the orange book Ounce by Hervé Martijn, which they apparently had in duplicate. To be honest, I didn't know the artist, but I could really appreciate his paintings. The book lay on our living room table for a few months before moving to our bookshelf in our office. The next time we went to visit them, there hung a real painting by Martijn, bought at Dessers gallery in Hasselt. My interest was sparked even more and I decided to learn more about this Belgian painter. And one thing leads to another. 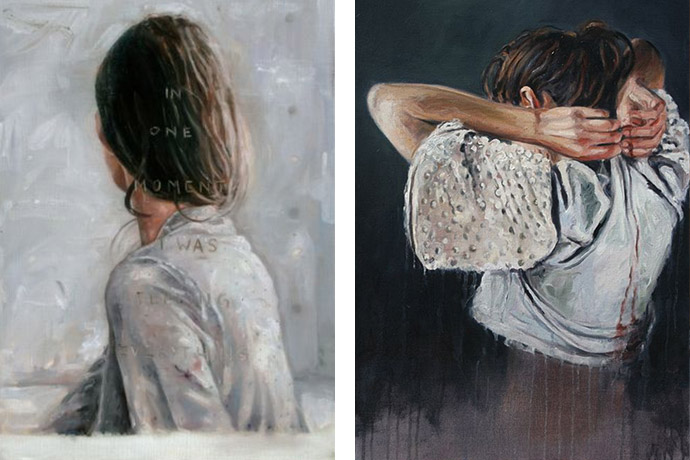 Hervé Martijn surrounds his characters with an insidious silence. He creates images that radiate a certain alienation and generate a slight excitement. Solitary figures that suggest the presence of another. He experiments with the quality of light through chiaroscuro and color nuances, but at the same time he is so accurate in his imagery. With his subdued sensuality, Martijn becomes a staunch advocate of contemporary narrative painting.

The emotions depicted are unspoken, suppressed feelings that still bear great stigma in contemporary society: psychological unrest, fear, depression and the associated isolation from the outside world. The painter thus creates a certain hermetic atmosphere. The figures often give the impression of being Einzelgangers, poètes maudits, cut off from the reality that surrounds them. They are in their own world, their own constructed cosmos and it is therefore difficult, if not impossible, to make a connection with them. The characters allow us to observe them and expose their deeper me, but nevertheless keep us at a distance. However, the viewer immediately enters the narrow, "suffocating" and fearful atmosphere of the scene. He no longer sees the figure, but becomes him and a kind of soul relationship arises. In this way Martijn knows how to capture the viewer endlessly. Viewing his works brings about an almost meditative and inevitably self-contemplative state.

His introverted figures navigate, like a doubtful and uncertain being, in a no man's land between myth and imagination, between dream and reality. Sometimes the figures fade away, sometimes they lie partially sunk in a background of muted, gray-white tones. This gray, neutral background increases the ethereal and spiritualized quality of his work, but at the same time arouses feelings of indeterminacy and indifference. In this way, Hervé Martijn's paintings incite even more contemplation about human destiny. 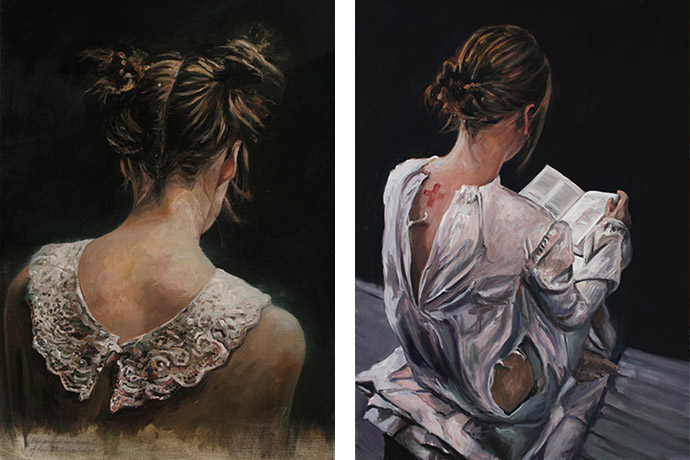 Hervé Martijn’s years of experience as a painter drive him to the extremes of his technical ability and question the nature of the true-to-life reality that he as an artist should allow to appear on canvas. Giving shape to a painted reality forces him to make artistic choices each time anew. Martijn’s lifelike translation consists in a painted diversity of reproductive possibilities with an inexhaustible and multipliable creative interpretation of a subtle, emotionally charged reality. His world, consisting mostly of beautiful women, is subtly manipulated on canvas by means of creative reinterpretation.

Martijn not only makes a lot of work from his paintings, text plays a very determining role in them. One can enjoy the titles that he gives to his artworks alone, as if he first creates a statement in order to come up with an image: Wear the old clothes and buy a new book, In one moment I was feeling everything, Told by a bird, I always wear my secret, I can't know your perception, Flemish and perhaps primitive, etc. The content of his titles, however, is not empty. They seem to break free from his imagery and explode in the face of the viewer. Because no matter how quiet his female portraits may seem, the gnawing tension within them can be cut.

The text, as in In one moment I was feeling everything (top left), is subtly processed and barely legible — like a fleeting thought that turns out not to be so fleeting afterwards. You don't often see a painting in which the main character turns away from you. It takes guts. Hervé Martijn’s muses shrink from the viewer’s gaze, or are stripped of their ability to look. A feeling of shame dominates the visible reality of those portrayed. In every painting the face is hidden or averted from the viewer’s judgment. As if the outside world can only observe fragments of a reality that has been made fragile. And it adds incredibly to the narrative aspect of the painting. Why is she turning around? Is it a casual attitude, is it an emotion that she wants to show, is it much simpler because Martijn wants to show that even in this way someone can be beautifully portrayed? And who is the 'I'? Is it the thought of the model or of the painter (which I can well imagine).

Another quote that we find on one of the works: "L'art c’est l'acceptation de la solitude". Martijn thematizes the artist's loneliness and shows the painter as a hermit, misunderstood and dependent on himself, who seeks refuge in art. The works of Martijn are in themselves very poetic. This aspect is enhanced by subtle inscriptions placed on the edge of the canvas. They are excerpts from Louise Bourgeois' diary; poetic and philosophical reflections on what it means to be an artist: "La chenille sort la soie de sa bouche, construit son cocon et meurt quand il est terminé. Le cocon a épuisé l’animal. Je suis le cocon. Je suis mon oeuvre. Je n’ai pas de moi." (The caterpillar takes the silk out of its mouth, builds its cocoon and dies when it is finished. The cocoon exhausted the animal. I am the cocoon. I am my work. I don't have me.) The artist is compared here to a caterpillar that provides itself with a self-spun, protective cocoon. In that sense, making art can also be seen as a form of escapism. During the painting, an entirely individual universe is also created, in which the painter can entrench and shield himself from the outside world and harsh reality. Making art is not only a creative process, it is also a form of self-protection. The unfinished, transparent strip at the bottom seems to move upwards like a smoke screen. This enhances the enigmatic aura. After all, shouldn't art increase the riddle above all?

"Painting has little to do with paint." — Hervé Martijn in his book Ounce 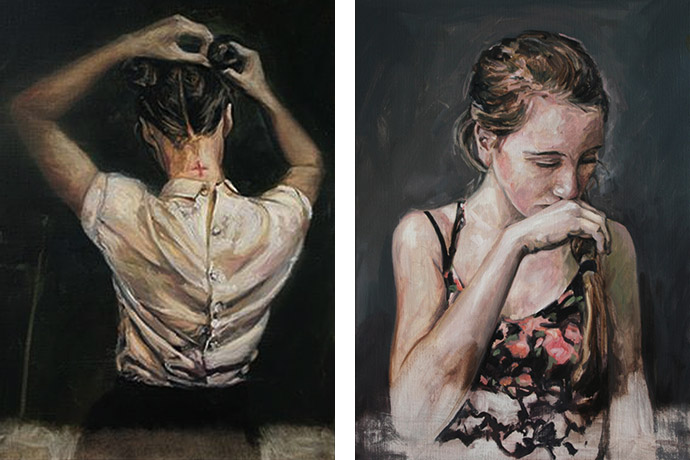 Hervé Martijn is equally concerned with the painterly process, the texture treatment and the sensory quality of his canvases. The tactile application of paint always gets the upper hand over the pure representation. Due to a curious superposition of layers of paint, visible reality is gradually displaced by a pictorial reality, which radiates an unsurpassable suggestivity and sensitivity. We are in the middle of a short history, a staged reality. Indeed, the work is not foreign to a certain theatricality. Martijn combines photographic precision with a pictorial adventure; the pleasure of painting here parallels technical perfection.

Mysterious references to stories we can guess at surround these images like an emotionally charged aura. Yet it is a well-defined world that he shows us, a microclimate in which his characters evolve. I cannot get rid of the impression that Martijn is playing a game, directing his figures like a dramaturge and allocating them a place in his image, which is as perfectly balanced as a theater set. He develops an aesthetic that constantly balances between life, eroticism and beauty. The deepest layers of our subconscious seem to be tapped here. Doesn't Hervé Martijn give you the impression of leading you into a parallel dream world? Surprising, recognizable and yet unexpected? His work arises from a psychological complexity, which is filtered out and at the same time creates ravishing and very intriguing images. In a way, the artist brings a synthesis of contemporary modern figuration. 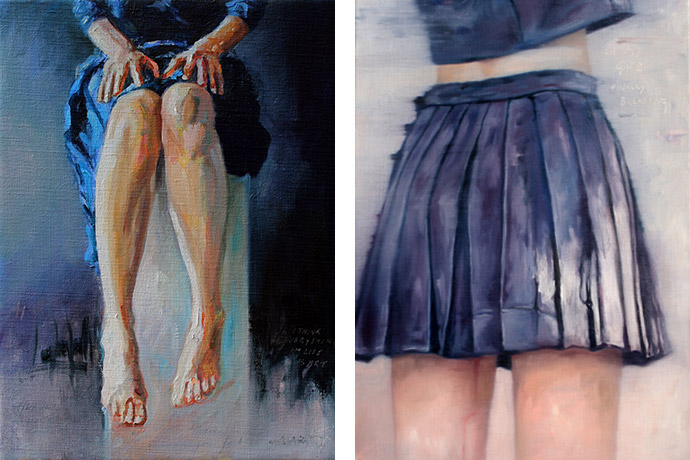 Martijn's brush carves deeper into the soul than you would dare to imagine. His desperate search for attitudes that expressively translate an inner silence often literally portrays a scratch, a wound, an injury, scraped knees and cuts, red cross-shaped stigmas, abrasions, eye patches or blindfolds. In more than one painting, a half-undressed, frail, fragile, bent-over body of a young girl shows a cut. A way of being marked for life in paint. A merciless Ounce upon a time in a fragile reality. The injuries in his work call for a gentle and understanding look at the characters in his paintings. The vulnerability shown in those injuries arouses a kind of compassion, much like a book or movie can evoke empathy for (sometimes even disliked) characters by showing the vulnerability of those characters. They are intimate scenes that unleash a wave of melancholy.

"Paintings about people : People in their innermost being, in a subdued attitude, meditative ... They rarely refer to a worldly given, they are merely absorbed in thoughts naked and vulnerable." — Hervé Martijn

Hervé Martijn is an unadulterated painter who is determined to follow the path of pure painting and continuously works on the renewal of this medium. For him, understanding human nature is a special experience, which he knows how to translate again and again. The artistic interpretation of the archetypal view of mankind remains an inexhaustible challenge for Hervé Martijn. Paintings do not necessarily have to be understood. Maybe it is better if we cannot fully understand them, let alone fathom them. Wonder is best kept under your breath. Watch, ask your own questions, search and be moved by that image that loads you with more questions than answers. 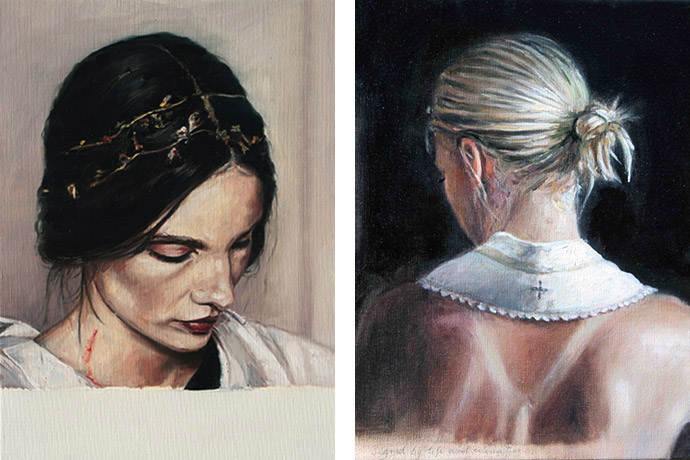 All images courtesy of the artist. All images featured © Hervé Martijn

If you have any questions about this newsletter or you got inspired, feel free to join our email list.
Get influenced. Sign up with your email address below to receive our monthly newsletter.